AT / 2018, Fiction, 21 min: A Mercedes is parked in front of a house, seems to be waiting, but the motor is not on. A girl walks by, approaches the door to the house. The driver stretches out of the window, he wants to go up with her. "Go away, Dad, you are embarrassing," says the girl — "I love you," answers the father. But Dana is not swayed. She is on the way to her mother´s housewarming party. Her mother has just moved into her own apartment after the divorce.

Director Kurdwin Ayub makes films about her immediate surroundings. "Make up your own stories for once, rather than always filming our lives," her father supposedly said to her. In her first long documentary, Paradise  Paradise  (2016) she traveled with him to her homeland, Iraq, and inspected the border there. Boomerang is now her first short film, and also her first work with a team, with a bit of money, and with actual actors. But that still doesn´t mean that everything has sprung from her imagination.

Towards the end of the evening, Dana´s father succeeds in sneaking into the party, latching onto the family; which is what they all are, albeit separated — geographically, mentally, and emotionally. Then he sits on the couch next to his ex-wife and Dana looks at the two through her snapchat filter. Her father´s head on the body of a dancing ballerina, her mother as a hilariously struggling partner. She can´t help but smile a bit. But the pain doesn´t quite dissolve enough through the canal of the display, and clear focus replaces the distance.

That´s strange, an emotional effect like a boomerang — and a quality that has become characteristic for Ayub´s works: with a seemingly careless assurance, she succeeds in coating modern "devices" that are meant to (supposedly) produce social connection, with pre-digital nostalgia. It appears both oddly foolish and charming. In any case, profoundly melancholic. (Alexandra Zawia -Translation: Lisa Rosenblatt) 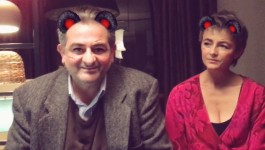